Every year some big whitetails grow old and die on public land. They live their lives just out of sight of hunters.

Finding that elusive deer takes work, but it is doable.

Here are five homework assignments that can increase your chances this year.

Study the habits of deer during different times of the year. A deer behaves differently in early fall than during the rut. He is a different critter in the post-rut period. They feed and bed according to the hunting pressure in the woods. With a lot of hunters in the area during the start of the season deer tend to go nocturnal. They hide out in thick cover and emerge only in low light or at night.

In cold weather deer feed more often. They need the additional calories to maintain body temperature. In rainy weather they often hold up in thick cover where they drink from standing water in puddles near feeding and bedding areas. In dry hot weather deer move to creeks and p0nds to drink.

The number of times a deer drinks depends on weather and his physical activity. During the rut a buck frequents a water source more often than during the pre-rut. Post-rut he needs m0ore water to replace that lost during the rutting frenzy.

Keep a map and notes of deer activity in the area you plan to hunt. Collect maps and G.P.S. waypoints. Get maps from your county highway department if they are available. They are usually accurate and still have room for adding notes right on the map. Topographical maps are also good. They reveal elevations. A spiral notebook makes a good place to note deer activity from one season to another and during the various seasons of the year. Make notes of deer movements under specific weather conditions too. Keep notes Keep notes from scouting and hunting expeditions. 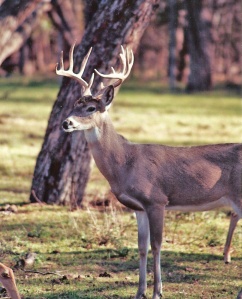 Scout the area as often as you can without disturbing wildlife movements. The deer do get accustomed to your presence and do not change their patters as frequently. Wear your hunting clothing while scouting so they relate your presence to a harmless intrusion into their environment. Use binoculars to observe wildlife from a distance and a range finder to note distances to specific landmarks and game trails. G.P.S. units make this latter much easier. The maps on the unit are really helpful.

Select your treestand locations with prevailing winds in mind. Locate them so as to allow you to approach the stand from downwind and yet not cross any game trails. Be aware the wind might be coming from a different location in the morning than would be the case in the afternoon.

Time your deer. Keep notes on when the deer are doing what. You should know which direction they wander when going to water or feeding areas and at what time of day they do it. The same is true of trips to bedding areas or loafing areas during the day. Deer are always doing something. If you know what, then you can be there before them.

The more time you spend studying deer, the more intelligent your hunting will be. On public land other hunters will disturb the deer patterns, but the deer will return to their routine as soon as possible. If you know their escape routes the hunting pressure will work in your favor and drive deer to your location.

The number of other hunters decreases as the season wears on until toward the end you could have the place to yourself.

If you have done your homework public land hunting can yield a big buck that has been hiding out from everyone.

Don Gasaway
For Don Gasaway life is and has been one of overcoming challenges. Something that he finds makes life sparkle.
He has hunted extensively in Africa, Mexico, and Canada as well as most states in the U.S. He is also an avid wildlife photographer.
Don’s work has appeared in many national and international magazines. He is a contributor to MidWest Outdoors, Heartland Outdoors, Indiana Game & Fish and Illinois Game & Fish Magazine. Don’s Blog is www.dongasaway.wordpress.com. He also has two Facebook pages www.facebook.com/Dons Journal and www.facebook.com/#9/DonGasawayWriter.
A number of national and regional professional writer’s organizations have recognized his work with awards.
Between hunting and fishing trips Don is a firm supporter of outdoor recreation in southern Illinois and is sponsor of the Don Gasaway Youth Goose Calling Contest at the Southern Illinois Celebration of National Hunting & Fishing Days in Carterville, Illinois.
https://dongasaway.wordpress.com/
« 5 Skills You Need To Survive In The Wilderness
How to Cook Healthy Venison Backstrap Stew »

Don't miss out and gain easy access to outdoor news